ACES2030: Concentrated Solar Thermal energy in the transport sector and in the production of heat and electricity.

Objective: A 32% share of renewable energy in final energy end use by 2030

Concentrated Solar Thermal (CST) Energy represents a sector of great importance in Spain in the fields of industry, energy and R&D. Of the 5,000 MW of centralised solar thermal power plants installed in the world at the end of 2017, 2,300 MW were operating in Spain, and Spanish companies lead or contribute in several projects in countries such as the US, China, South Africa, Chile, United Arab Emirates or Morocco.

The new challenge in reducing emissions, through the advancement of the new Integrated National Energy and Climate Plan, involves doubling the penetration of renewable energies to 32% of the energy end-use by 2030. This means not only increasing solar power generation, but also doubling its thermal use in industrial process heat and quintupling its participation in the transport sector.

ACES2030 (2019-2023) is a programme of research activities funded by the Regional Government through the Programme of R&D Activities among Research Groups of the Community of Madrid in Technologies 2018, which is based on the results obtained by previous programmes, namely SOLGEMAC (2010-2013) and ALCCONES (2014-2018), consolidating their research lines and adapting their objectives to the new needs of the renewable energy sector in line with European Union targets for 2030.

The consortium of entities that made up ALCCONES (IMDEA-E, URJC, CSIC, CIEMAT), is strengthened by the incorporation of other important CST groups in the Community of Madrid (UPM, UC3M, UNED), the Laboratory of Mechanical Integrity (LIM) of the URJC and the participation of the Spanish Association for the Promotion of the ProTERMOSOLAR Thermosolar Industry (PROT) and companies in the Associated Industries (EA), Abengoa Energía (ABEN), Grupo Cobra (COB), Rioglass Solar (RIO) and REPSOL (REP) sector as partners.

The collaborative structure in ACES2030 promotes synergy between facilities and laboratories around solar thermal technology in support of the industry’s R&D activities, with the ambition of being the seeds of a future Network of unique infrastructures in the Community of Madrid (“Madrileña Platform in Concentrated solar Systems”) and which currently include: 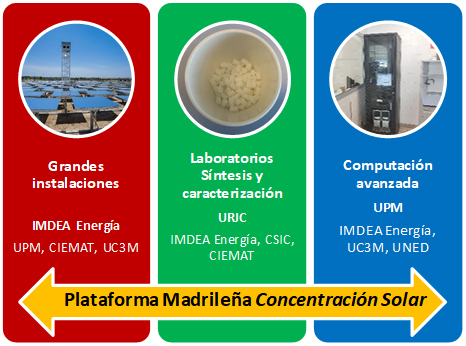